On my way into work today I saw a car that had broken down on the shoulder of the road, and behind it, stopped to help was a full tractor trailer. It reminded me of my issues I had a few weeks ago, and that I hadn’t taken the time to post about it.

It was the week that I started my new hire training with Sprint and was commuting into the twin cities, which is between an hour to an hour and a half commute. I had known that my tires were in need replacements because one just kept losing air.

I had given myself an hour and 45 minutes to get there that morning, just to make sure I could find the place and get myself settled in for the week. I was driving along, like normal, going 5 to 8 miles per hour over the speed limit, which would make my speed 75 to 78, and I felt a vibration in the steering wheel. My initial reaction was to take my foot off the gas and slow down. A second later I felt the tire blow, and the car started to shake really bad. I hit the brakes hard, looked over my shoulded and made an instant lane change from the center lane to the shoulder.

So there I sit, on the shoulder, with no idea of what happened.  I peeked out and saw that it was the tire that was giving me issues before. The front drivers tire had blown out.  In order to change it I was going to have to get further off the road, so I inched over so that I was way off the road, then proceeded to change the tire.

As I was fighting with getting the lug nuts I glanced up and saw that an SUV had stopped in front of me.  Between the 2 of us we got the lug nuts loosened and started jacking.  We soon realized that the jack was too short.  The guy who had stopped went and got his jack and we got the spare tire on. I couldn’t thank him enough.  He said that he thought that 2 cars were safer by the side of the road than 1, especially in  rush hour traffic. I don’t remember his name (Brandon?) but I remember that he was the General Manager of Papa John’s Pizza in Maple Grove.  Without him stopping I wouldn’t have been able to get back on the road.

So I started off again.  I called my manager to update him that I was back on the road and the GPS said I still may make it in time.  I fought through the traffic and arrived at the office with a few minutes to spare.  Made it up to the classroom 4 minutes before class started.  It all worked out in the end, aside from the $500 price tag on the new set of tires, but the car drives great now… 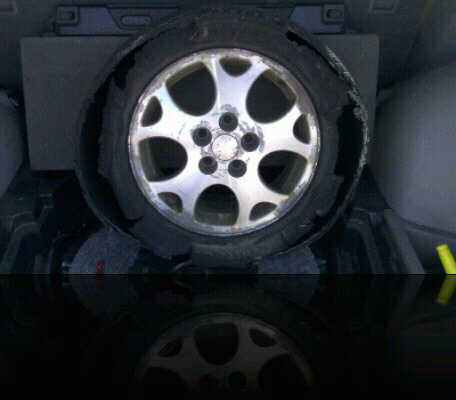