in the massive number of “defense” games out there for Android Cartoon Defense is up there near the top of the list. Gameplay is good and the artwork is amusing.  Worth a download at a dollar, and definitely worth a free download…

So download Cartoon Defense from the Amazon Appstore. Check it out at: http://amzn.to/kOTceQ 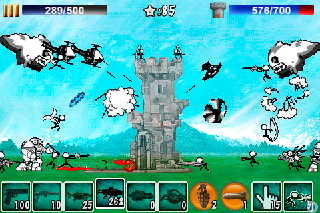 Tower Defense 101
For those unfamiliar with the addictive tower defense genre, the game mechanics are fairly simple. You’re provided with cash to build towers of varying designs, strengths, and costs. Eventually your enemies (called “creeps” in this game) will come pouring out and make a beeline toward the exit you’re defending.

Every time you blast a creep, you gain a little money to build more towers. You can also spend your money upgrading the towers you have. Every time a creep reaches the exit, you take damage. Tower defense games are essentially a juggling act of resource allocation and fast reflexes.

Stay Calm. Don’t Panic. Keep Firing!
As creeps keep coming and coming, ZDefense evolves into a frantic maelstrom of destruction. You’ll face 50 waves of enemies in less than five minutes. Defend an exit in the middle of the map from creeps coming in from all directions. You simply can’t use the same strategy for every level; you must change up your tactics for each map.

ZDefense’s maps generally have 10 to 30 waves of enemies. The full version features five tutorial, ten normal, and eight hard maps. There are five tower types with seven levels each. To make your life more complicated, a special tile called the Space Gate allows creeps to teleport from one gate to another.

Command the Creeps
ZDefense comes with a map editor so you can create your own nightmare scenarios to terrify your fellow tower defense fans. The editor comes with full instructions and customizable maps, creeps, towers, and waves. Customize the game mechanics, such as wave wait times, base life, money, and more. You can also take screen captures of your game to record your victories and show off to your friends.