A tipster sent me a message to let me know that Sprint has rolled out an update for the Samsung Epic that should be rolling out over the air over the next couple of days. If you are an owner and want the update a little quicker it is available for download directly from Google.  This download is the exact same update that would be downloaded to your phone and is safe to install.  (Just don’t pull the battery in the middle of the update, and make sure your battery is charged up.)

Here’s the directions, (from Android Central): 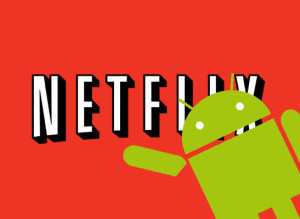 Netflix announced today that their application is now available on Android Market for all* Android phones.  Well all* (take note of the *) means any Android phone that is running 2.2 and up (Froyo, Gingerbread, and Honeycomb). Fortunately this is a large number of Android devices.  Unfortunately, I have to apologize to all of you out there with the older devices…

Alternatives to the Android Market

So you have an Android phone that you want to be able to make your own, or you may feel a little restricted by Google’s Android Market.  What other options are out there?  I do a lot of talking and linking to things in Android Market, but I also talk and link a lot about the Amazon Appstore. The Amazon Appstore (among others – see below) is an alternate place to download apps for Android and along with the below list gives you the freedom to get your apps from anywhere.

I will cover a handful of app stores below. Feel free to check them out and comment about your experiences.

Looking for an alternative to your stock keyboard, or possibly the preloaded Swype keyboard on your Android phone? Give this one a try, free today only! Save yourself a few bucks! (normally $3.99)

Android Ringtones – How to get/make them. 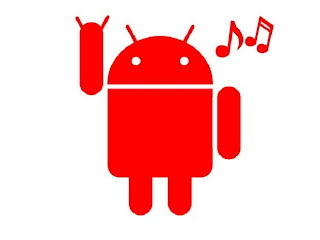 Ringtones. You would imagine the your options for ringtones would be so much better than on a normal non-smart phone, and you would be correct in that assumption. There are multiple ways to get ringtones and even multiple ways to make your own ringtones onto your phone.

For starters, the way that android organizes his ringtone management is (in my opinion) very well laid out. On your memory card there are a bunch of folders.  If you look very carefully you will see a folder called “media”.  If you don’t have one, create it.  then inside of that folder you should have an “audio” and a “video” folder.  Then inside of the “audio” folder you should see the below group of folders “alarms” “music” “notifications” and “ringtones”.  This is the place on the SD card where the Android OS looks for sounds. 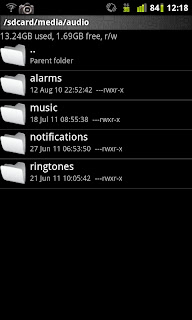 So if you want to make a tone that is for a phone call put it in the “ringtones” folder.  For an alarm put it in the “alarms folder, etc.  Modern android phones (version 2 and up) will support multiple file formats.  The main ones are .ogg and mp3.  So you can manually cut down a music file with a desktop application and copy it to your phone’s memory card in this folder and you are good to go.  But wouldn’t you like something easier?

The easiest method of making a ringtone is to do it right through the "Music” icon that is preloaded on your phone.  Let’s say you are listening to your MP3 collection and you hear a song that you want to make your ringtone.  No worries, just press the menu button at the bottom of your phone (while the song is playing) andyou will see an icon called “Set as Ringtone” (see image below). That’s it.  It will do the dirty work for you – create the tone and set it as your default.  Can’t ask for an easier option. Although there is a pretty big downfall to this.  It creates the tone just for the first 30 or 40 seconds of the song. 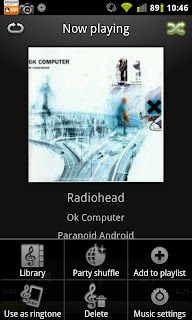 When your phone rings you don’t always want the intro of the song (although the beginning of the pictured Radiohead song is pretty badass).  Let’s say you want the tone to start at around 2:42 when the hard part kicks in.  So you need a solution that will let you pick that certain chunk of the song and make that your tone.  That’s where RingDroid comes in.

RingDroid is an app that lets you create a start and stop point of an MP3 file and turn it into a ringtone/alarm/notification.  All right on the device, Plus it gives you an option to set it as your default tone.  The best part of the app is that it is a FREE app available from the Android Market, or through the Google Code site. See the image below: 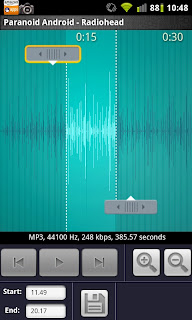 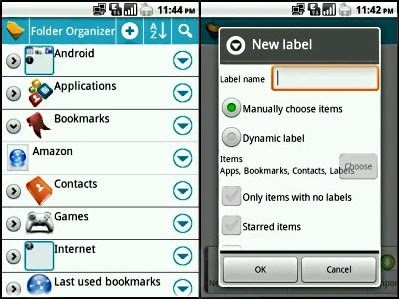 Everyone likes an organized phone. Even someone as scatterbrained as me. With FolderOrganizer you can organize all the stuff that matters so you can make yourself more efficient. Efficiency at it’s best – best price that is. Get it today only for the low low price of FREE!

I am a little bit embarrassed to say that I have been displaying all these fancy barcodes all over the site to be able to have a quick way for you do download these great apps, but I haven’t done any explaining on how they work or what programs to use to scan them. Well the way it works is simple. You just have to load the app (3 great examples below) and choose the option to scan a barcode. It will load your camera app up with a cool target or line on it to help you line up the barcode and once it focuses and recognizes the barcode it will load the appropriate page (or a confirmation screen letting you know where it is taking you to). So without further delay, here are my favorite 3 barcode scanners (in no particular order).

Did you see how I did that? I just linked to a barcode scanner app with a barcode… Yeah, that’s how I roll. I guess it is there incase you want to test it out, or you already have on of the apps and want to try another one. Regardless of the reasoning enjoy!

As promised, here are the Top 5 of the Top 10 Android Home Replacements/Launchers that we will be reviewing. As with any sort of  "Top" list, don’t take it as the definitive list because new apps come out all the time, and I am probably missing some great launchers – I am an old robot after all…  So here is my list of the top 5:

So if you like these and want to try them, follow the links and download them to you phone.  After they are installed the next time you press the home key it will ask you if you want to load the current launcher or the new one.   You can also set one as a default by checking the check box. 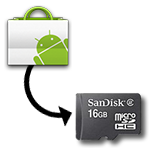 First you have the ability to “force” apps to go to the memory card.  Therefore, if the developer hasn’t set it’s permissions for it,you can movie it over to the card anyway.  This works great in most situations, unl;ess you are dealing with a widget, or a home replacement app (like ADW or Launcher Pro) because they typically stay in memory, and you could break the app by doing this.

The second option is to actually re-partition your SD card (which does erase your data) and create an android partition right on the SD card,so you could move ALL of your apps over to the card and leave the internal memory for your android installation.  This option can significantly speed up your phone because you will have a tone of free space for the system to run in.

For information on either of these options I recommend doing some research on some of the various message boards out there, especially  XDA Developers, because that’s where all the experts tend to hang out. 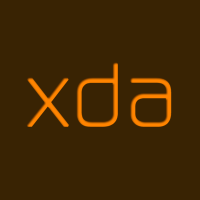